Errata for Arcane Journeys the Fantasy Adventure Board Game

5/14/2017 - The Purification spell should say "Discard to remove an encounter card from a space on the board, or reduce the danger level by one there." instead of its printed text. Because it comboed with the spellbook to stop the game from ending.

But it's done now, and in the official record for people to find.

See the entire errata page for the game here. 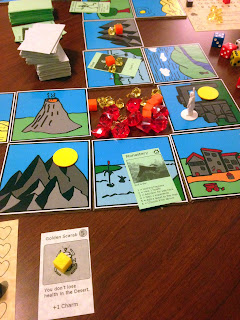 Email ThisBlogThis!Share to TwitterShare to FacebookShare to Pinterest
Labels: Arcane Journeys the Fantasy Adventure Board Game, Board Games