7 Ways to Stress Test your Board Game 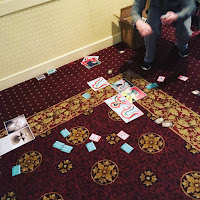 Doesn't it seem sometimes when you sit down to play a board game that some parameter or other is out of whack and you come up with an idea, in a couple of minutes of brainstorming, that actually makes the game better? It does to me anyway, and I think sometimes not enough testing, and not enough variety of testing gets done before a game's release. So, here is my light-hearted, yet serious in many ways list of how to stress test your board game! Some are more universal than others.


The whole point of these tests is to look at your game from a different angle than your habitual one. It doesn't mean every game has to pass every test, or fit every person. It's just a way of making sure you decide the parameters of your game, instead of just letting them happen unawarely.

Really, people have different lighting, different visual acuity, are of different ages. Simulate that some! Maybe afterwards you realize you want more contrast, larger text, more white space, less text, clearer icons, and so forth. Also color changes according to the amount of light. Subtler colors are harder to make out in low light. Maybe more saturated colors?

2. Play with a color-blind person.

This one's personal: I am color-blind and seriously dislike a game that doesn't take that into account, especially since there are several things you can do to make it a non-issue, like put symbols paired with colors as identifying marks. And 1 in 10 men is color-blind, so its a large audience. And from personal experience, I can tell you that not every person sees color in the same way, so just choosing a palette one person says is OK is not a robust solution.

3. Play at a smaller table.

There was something going around saying "Fantasy Flight Games doesn't want you to have any table space left." Because sometimes their games plus a couple of expansions don't fit on a regular person's table. I pictured them testing on their big conference tables, and was like aha! They needed to get out and play in someone's kitchen. That is not to say that every game has to fit every table, but this is an interesting thing to try and think about your game.

I know, it's the opposite of the last one, yet it is another interesting angle. Can you read and decipher parts of the board from another 2 feet away? Do you have to get up and go around the table to see something? Doing this can shed some insight. Maybe you need larger text, or clearer graphic design, or help cards for each player.

5. Try to put your game into a backpack and walk to a friend's house.

If you can't even get it into the backpack, that tells you something about who you are making the game for. Which is useful information. If you get it in, and take it to your friend's house, and it is all jumbled about, think about bags, inserts, etc. Some people, if you can believe it, don't put everything into baggies, they just throw stuff into the box. What is setting up your game like from that? A good perspective to help you think about the players of your game, and the contexts they play in.

Is it even possible? Was it tedious? Was it impossible to decipher visually? When people describe a part of it over the voice, do they stumble to come up with words for parts, or is it clear what to call everything? Just think about it.

Plus or minus some depending on your game's length and style. I am dead serious about this one. This is just what should happen. What bored you? What became tedious, and after how many hours of play? This filter can and should improve your game design and game design skills. Then play it for another 100 hours. How was setup? Do you need to take out a fiddly rule that only came up 2% of the time and no one could remember without looking at the rules anyway?

I remember when I was testing Arcane Journeys the Fantasy Adventure Game, and I made two rules changes after 200 hours of play. And those changes made the game much much better. But I needed to get there. They were easy to overlook things if you played or designed casually. But to be an excellent designer, you can't be casual in your approach, you need to put in the time.

I used to make computer games, like Majesty, and for those you often need to put in many more hours of play, and take a lot of notes, due to their complexity, and that helped me hone my discipline as a designer.