Mistakes in Card Layout - Titles not at the top!

Continuing the series about card layout in board game cards, we come to Titles not being at the top of the card. They should be, if the card is ever in a player's hand and there is more than one card. Also, it is the most prominent position on a card, and usually putting a title at the top helps to solidify its identity. Occasionally a picture there will do that. But most often if the title is not at the top, the identity is more vague.

Here are some visual examples: 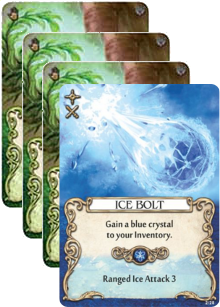 A stack of cards from Mage Knight. What the heck are those cards below the ice bolt? When I play the game I never refer to the cards by name, since the name is not available to be visually focused on most of the time. Thus the thematic identity of the cards is weaker. Too bad. I love Mage Knight! 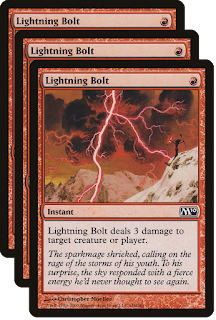 A stack of Magic the Gathering cards. You can tell what the lower cards are. I always refer to these by name when playing. Much stronger thematic identity. And usability in a hand of cards.

If a card is never in a player's hand of cards, there is more leeway:

Units in Mage Knight are played to the table, so they look nice and are perfectly usable. And their identity works because you can see the name and picture at the same time.

Check out the previous entry in this series:
Mistakes in Card Layout - Centered Text

And the next one:
Mixing Symbols and Text
Posted by Jim DuBois at 1:36 PM