You've seen those cards. You've tried to read them before the rulebook. You've been mid-game and stuttered over them.

An you go, "Uh, take one, um, round thingie, a coin maybe? to activate a squiggle as long as you have something that looks like a slash. Maybe zap power or something?" And no one gets it!

Mixing symbols inline in text is a bad idea, because visual symbols are more ambiguous than text and they are harder to draw definitely. It actually slows down comprehension, and reading, and elegance. The more symbols you have in the game, the worse it is if you mix text and symbols.

Having symbols on a separate line, or a sidebar alongside the text is fine, because the words help define the symbols, and when they are clearly defined in people's mind from play then they can use the symbols as a shorthand, possibly.

Having symbols count as their own thing outside a sentence is fine.

Also naming something is part of creating a feeling and theme in your game and when people don't know the name, and go around calling it "thingie" or "zap power", it undermines the hard work you did to make the game how you want it.

I noticed while doing the research for this, that is a mistake that most professionals are not making, but many beginners are making.

Good examples of text and symbols together: 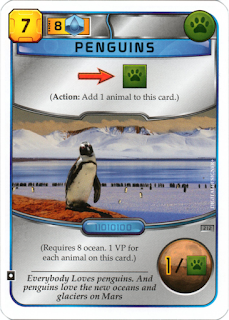 From Terraforming Mars. Separate lines for symbols and text. Well done. The text defines precisely what those symbols above it mean. After a while of playing the game, you will be able to read the symbols.
Examples of bad mixing text and symbols: 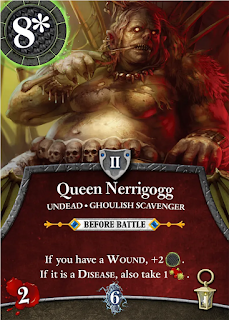 If you have a wound, +2, um, manhole covers? bottlecaps? I'm not sure. If it is a disease, also take 1 something totally undefinable. There are a lot of other mistakes on this card besides the mixing text and symbols. From Thunderstone Quest. 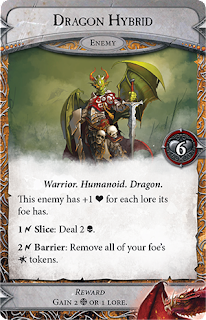 From Runebound third edition. There are too many weird symbols mixed in the text. I can guess some of the meaning, but would like it to be clearer. They could have put a box around the costs (2 zappies) to separate it visually, and that part would be fixed. Good things they did: title at the top, left aligned text in the reading area, and a border to the whole card.

Previous posts in this series about mistakes in card layout:
Centered Text
Titles Not at the Top
Posted by Jim DuBois at 3:19 PM