Something which sets games apart from other mediums is dynamism, ie, the ability to travel through a game by a different path when you play a different time. And that ability to go by different paths requires choices to be made by a player. But not all choices are created equal! The best choices are ones that are meaningful, and by that I mean choices which are understandable and affect the dynamic environment in response to having been chosen.

There can be apparent choices when there are actually none, which is the poorest kind of dynamism in a game. For example, in this iPad game, Soda Dungeon 2 (also available on Steam and for Mac), I have been playing lately, every time your party of adventurers defeats a boss, you get to pick a treasure! 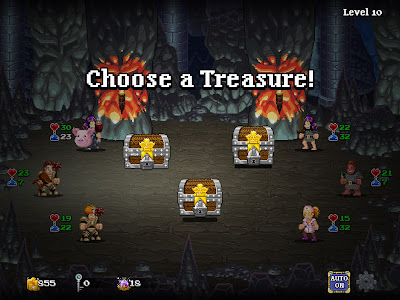 And yet, there isn't really a choice, because you have no information to use to help you make a choice. They could have just given you a random treasure and the effect would be the same. There is not actually a choice here. What they could have done to make that a more meaningful choice is to label one chest as "gold", one as "equipment" and one as "mystery". That's not perfect but it lets you think about what you need in the game a little, and if you want to take a risk, you can pick "mystery".

Also, every once in a while on your adventure in Soda Dungeon 2, you get to pick an alternative path: 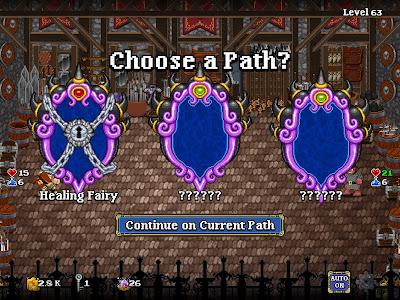 While this is slightly better, since one of the choices is labeled (yet locked, so again, not a choice a lot of the time), the other two choices are complete mysteries, and since they give you no information about anything which might happen if you choose one over the other, there again is not actually a choice.

Now maybe there is something clever in their code that says the right most choice is always more dangerous or something, and you could learn that over time, but that alone isn't enough. There has to be more information presented to the player to make an informed choice with. In this example, maybe they could label the two mystery choices "risky yet rewarding" and "safe but less rewarding" and it would at least let a player pick a play style at the moment.

The bad side of including these types of non-choices in your game are two: 1) they sort of paralyze the player for a second while they try to figure out with no information which thing to pick, and 2) they add in extra clicks, which I am a fan of eliminating. Why not just pop up the found treasure? Over time, less clicks, less time wasted. Also, making choices meaningful makes a game more strategic, more replayable, and more dynamic.


Soda Dungeon 2 is a fun and silly game, despite these spots where it could be made better. You hire heroes and send them through a simple dungeon to collect loot and defeat bad guys.
Posted by Jim DuBois at 11:00 AM