This is a collection of other common mistakes made when laying out cards for board games, to end this series on the blog.

1. Low contrast. If you have gray text on light gray background it is going to be hard to read. Make sure you use high contrasting colors between your text and the text background. White on black or black on white is the best.

2. Not enough White Space. White space is the gap between the edge of your text and the box it is in or the sheet it is on. When there is too little, your eye will "catch" on the bounding box, and make reading slower.

The text is too close to the bounding box on this card from Smash Up. They also centered the text which additionally slows down the reading and comprehension.

3. Text Background box over graphics is too transparent. So the fun graphic you put behind the text box shows... but also interferes with the text. Make the box opaque or only very slightly transparent. The goal is the most readable text. 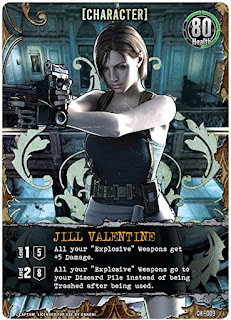 This card from the Resident Evil deck building game is a good example of a transparent text box behind text, done right. They have the right side, where there is no text, more see-through than the middle, where the text is.

One other problem with the layout is: title not at the top. It would increase the immersive feel to have "Jill Valentine" at the top of the card, especially instead of "[Character]" which is dull as well as useless to have there.

This card is never used in a hand of cards, otherwise I would say it has a full bleed problem. See my next point.

4. Full bleeds! This is when the graphic on the card goes all the way to the edge of the card, instead of being interrupted by a border of some kind. It sure looks nice, but it blurs where the edge of the card is, and can result in making it hard to differentiate between individual cards, especially from the back when they are overlapping. If your cards are always face up on the board, and never overlapping, maybe this is ok, but if they are overlapping, held in a hand multiples at a time, then it is not. If you HAVE to have the image go to the card edge, at least put a pseudo border around the edge by darkening or lightening the image there.

These cards from Thunderstone Quest illustrate my point. See the middle left of the top card? Very hard to find the edge between it and the card below it, so it becomes a usability issue in terms of differentiating and picking up. But the white text on blue background has good contrast.

See what a solid border does to differentiate the cards? From Magic the Gathering.