I have been playing this tower defense game, Guardians, on the iPad for a few months now, and I am up to level 526 (?) and I was thinking about how a score is calculated in a game. In Guardians, I have no idea. I just finish the level and there is a score. Sometimes 1000, sometimes 10000.

As I was wondering about this, I noticed a "?" in a circle next to my score for the current level. I was like, "Oh, maybe I can click it!" (Which says a few things: 1. I hadn't noticed it in over 500 wins of the game, and 2. I wasn't sure it was a button. Maybe they could have made it larger, and shaped like all the other buttons in the game...) 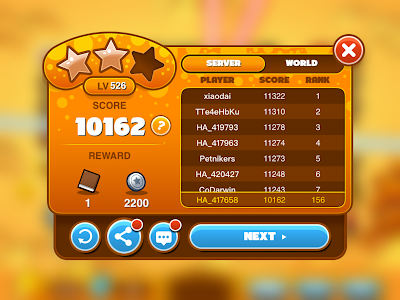 So I click it and it takes me to a screen which tells me the general idea of how to get a good score: finish fast, use as few towers as possible, and a few other things. And... I am still in the dark about how my scores are formed, since they made a mistake that is particularly easy to make in digital games  (as opposed to board games) which is not showing the numbers. I wrote about that here.

Without numbers, you can't really evaluate, or weigh the different elements in your score. Was finishing fast more or less important than using fewer towers? I will never know because they didn't show the numbers! That screen would have been a great spot to show the exact numbers for each section, and then the total, so if I wanted, I could try to maximize my score. Which I don't, since I don't care. I just like to finish the levels.

Mystery math is that behind the scenes calculation that comes up with a score for something. Don't do it. Always tell the players the numbers that form their score. Or better yet, ask if you really need a score in your game? Can you just record if they finish a level or not? Or maybe the three stars thing? You know: one star for finishing, 3 stars for finishing without losing any health, and 2 stars for... for... some other random thing. Which I also hate, but it is slightly better than a mystery score.

My favorite thing for tower defense games, since they are real-time, is to simply record how fast you solved it. That encompasses a lot of different elements of the game, and has an easily understandable result.

If that is not the feel you want for your game, is there any other one number element that you think determines the core elements of the game? Maybe the best score in your game equals spending the least money, ie, being the most efficient.

Me and my game night buddies came up with the "Mystery Math" phrase while playing board games on Board Game Arena. Since the end scoring of a game is automated, it just starts adding up behind the scenes things and showing the end result. Albeit usually afterwords with a chart breaking down the categories, which does really help. But in many games the interface is hard to follow and you're still not sure what happened, especially while it is happening. This is a particular interface problem that comes from "porting" a real life game to an online game. Really, new interface elements have to be thought about and added to make the game play well on the new medium. Like light up outlines, and animations to help draw your eyes to whatever element is being referenced.

When playing a board game in real life, you get a better sense of the numbers that add up to your final score since you have to add up the categories by hand. (Sometimes, like in Carcasonne, with those &%$^ farmers, you still aren't sure why you lost or won.)

I understand why many modern board games obscure each player's total points until the end. It is so that you can't tell who's ahead exactly, and be discouraged about it. It can let a player feel like they might catch up. It can help a player focus on the game dynamics and experience and not the competition. It can keep dramatic tension high until the end. Who will win? But it also feels like mystery math until the end, even though you could often do the math during play.

Its not my favorite, but I don't hate it, at least, in board games. I prefer point-threshold games (when someone reaches X points, they win), and goal oriented games. Or just whoever has the most points at the end wins. No mystery math in those.