I've played a lot of Gravity Rider, an iPad game, lately, and it made me think of some user interface feedback for digital games.

Gravity Rider is a motorcycle racing game with a futuristic twist. Racing the bikes around the track is pretty fun. Everything that surrounds racing the bike is pretty tedious. Upgrade, get chests, lots of gamification and pay to play stuff, which never help a game play well.

The item to discuss today is the garage. You can flip through and see the different bikes you own and their stats... I mean you can sort of see their stats. Because the stats are just shown as bars! And you don't really have a sense of what those mean, and you definitely can't precisely compare the stat of one bike to another. I mean, sometimes you can say that THAT bike is definitely faster, and THIS one has a higher rotation stat (whatever that means, a different UI problem). And if the bars are even vaguely similar in length for a stat on different bikes, you just can't tell what is what.

The main way to fix this is SHOW THE NUMBERS!

Say, "this one has a speed of 5. This other one has a speed of 4." Put the actual number near the bar. Very helpful. In a real-time game, you might even say this one moves 3 feet per second, and this other one moves 4.5 feet per second. Even more helpful. Then people can evaluate the game better. Like, they might then say, "Oh, this one is 1 lower speed, but 2 higher acceleration. There are a lot of stops and starts on the upcoming race track, so maybe that is a good trade off." Otherwise it is more like, "Maybe I'll just try this one."

Let a player know what the numbers are, so they can make precise choices instead of approximate guesses.

Imagine your game was a board or card game. Without the numbers, it literally wouldn't be functional. So not showing the numbers in your digital game and letting the computer just use them makes the interface non-functional, even if the game runs fine with those hidden numbers.

Maybe you want to have a sense of mystery. Fine, don't show the numbers if that is what your game is all about. Otherwise, SHOW THE NUMBERS! They help a player understand and make meaningful choices in your game. 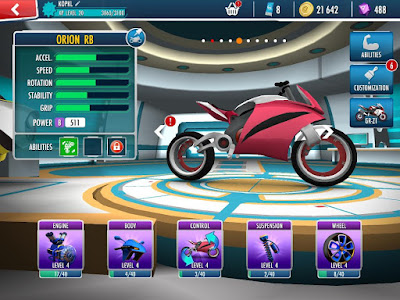 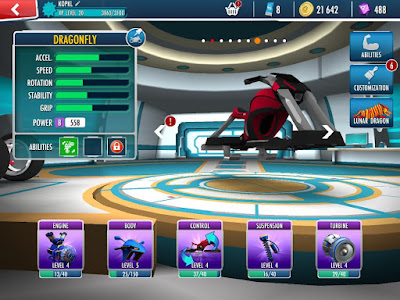 Images above are from Gravity Rider. Notice they do have a number, which is a conglomerate of all the stats. Possibly. But we don't know for sure. It is mostly a useless number to base a decision on. Except to say, overall this bike is better.

Here is the link to Gravity Rider. Give it a try. It is actually fun to ride the bikes around, yet could be a much better game overall.
Posted by Jim DuBois at 12:01 PM